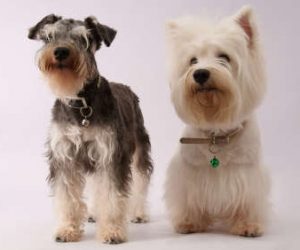 Miniature Schnauzer puppy socializing skills training requires patience and understanding on your part, just as it requires with any breed of dog.  This is a subject that often arises with new or inexperienced dog owners, and that’s fair enough as every dog owner needs to be comfortable in the knowledge that their canine pet is capable of interacting with all family members, friends, and the general public who they may encounter in the normal run of daily activities.

As the owner of your Miniature Schnauzer puppy it is important that you are familiar with the skills necessary to train him to socialize with people and other animals so that being with others is an enjoyable experience for all concerned. Also, it makes sense that prior to adopting a puppy, you learn what is required on your part in training your puppy to be sociable so that you are prepared for any situations that may arise. In saying that, it’s not all that hard to grasp the fundamentals of early socialization.

If you are adopting a new puppy it is likely that he will be about 8 weeks of age when you bring him into your home. Puppies are adaptable to learning at an early age and so new experiences right from the start are preferable, allowing of course that your puppy is likely to be fretful when you first bring him home. After all, the only life he has known until now is being with his mother and siblings. Suddenly they are no longer in his life, and his new surroundings are strange to him; and then there are these new people. Who can they be, he wonders! So don’t expect too much of your puppy for a day or so. However, with love and affection shown, puppies respond well and your Miniature Schnauzer puppy is no exception; you will be able to start early basic training, including socialization.

If you stop to think about this subject, socialization actually happens by default. In other words socialization is happening with your puppy within his immediate surroundings right from that first morning when waking up in his new home, until he goes to bed at night; and so it goes on! Teach your puppy to:

• Greet you appropriately when he first sets his eyes on you each morning. No doubt he will want to jump up at you and want you to play with him, and, according to whether you want such activity first thing in the morning, you will be training him to behave in the manner you expect of him at that time of day.

• Playtime is important to your puppy, but first thing in the morning may not be suitable to you, so that is one of the first rules you will no doubt want to set.

• Even though you may not consider early morning activities to be referred to as socializing, the behavior and training at that time contributes towards the socialization training in that your puppy is learning that you are the leader, and that what you say he must abide by.

Your puppy will learn very quickly and once you have this early morning activity under control, along with teaching him other basic skills like sit and say, he is then ready to be introduced to friends and places that currently are unfamiliar to him.

Introducing Your Puppy to Friends

Make sure that these friends are dog loving people; don’t expect others to love your puppy as you do; in other words, don’t inflict your puppy on people who are not all that interested in the canine species. It is not fair to them, and it is certainly not fair to your puppy.

It‘s important to protect your puppy from threatening situations and putting him in an environment where he is not appreciated can be disturbing to him. Puppies of all breeds right through to adult dogs are intelligent enough to know when they are not liked, but not necessarily intelligent enough to know how to deal with being in an ‘unwanted’ situation. Hence, bad behavior on the part of your puppy can happen and the desired connection of forming happy socialization relationships is unlikely to occur, and you could be left feeling embarrassed and let down by your puppy and your friends.

Similar principles apply to introducing your puppy to children. Of course if you have children in your family it’s fairly sure that they already love your puppy as, no doubt, you wouldn’t have brought a puppy into your home if your children were really concerned about having a canine pet.

Other people’s children may not be so welcoming to your puppy, so don’t put him in the position of being teased by them and becoming frightened or frustrated by their behavior. Be sure that children outside of your family will be kind and considerate to your puppy before you allow him to be in the company of these children. A puppy that has a bad experience of being teased can become nervous and attempt to escape from the situation. I personally have experienced a sad loss of a puppy through thoughtless teasing by young people who did not realize that their actions could cause such a disaster.

Reactions of Other Dogs

Dogs that are strangers to your puppy are another consideration. Unless you know the other dog’s temperament, and feel sure that your puppy will be spared excessive aggressive barking being directed at him, avoid such contact in the very early stages of his life. Let him face those situations when he is a bit older.

Your Miniature Schnauzer puppy is capable of learning socialising skills at an early age, but it’s important to introduce him gently into strange surroundings that may be overwhelming for him at first. With gentle understanding, and good training skills on your part, you can expect your Miniature Schnauzer puppy to become loveable and sociable, and accepted among your circle of family and friends.

Even friends who are not true dog lovers can get some pleasure from a good natured and well behaved puppy, and it is interesting to experience how a well behaved family pet can, over time, can capture the attention of someone who has professed that they ‘don’t like dogs’.  I smile to myself when I see someone who says that they don’t like animals, give warm attention to a dog when it is thought that no-one is looking! I’ve yet to meet the person who can’t be ‘won over’ by the cuteness of a young puppy.

First time dog owners often overlook the necessity of teaching their new puppy how to socialize. The delight and excitement of adopting a new puppy can override the necessity for a young puppy to learn how to interact with those around him; consequently the days turn into weeks and suddenly there is realization that this little bundle of joy is now causing havoc. He’s getting his own way and is ignoring pleas from all concerned to “stop doing that”, or “go away; I’m busy”. Well, whose fault it this? Certainly it is not puppy’s fault as he has been left to do as he wishes, and of course he won’t respond to ‘calls to stop’ as he doesn’t understand what is being said to him. All of a sudden life isn’t what it used to be, and puppy is confused. Don’t let this happen to your puppy; see to it that you train him well right from the start.

This website uses cookies to improve your experience while you navigate through the website. Out of these cookies, the cookies that are categorized as necessary are stored on your browser as they are essential for the working of basic functionalities of the website. We also use third-party cookies that help us analyze and understand how you use this website. These cookies will be stored in your browser only with your consent. You also have the option to opt-out of these cookies. But opting out of some of these cookies may have an effect on your browsing experience.
Necessary Always Enabled
Necessary cookies are absolutely essential for the website to function properly. This category only includes cookies that ensures basic functionalities and security features of the website. These cookies do not store any personal information.
Non-necessary
Any cookies that may not be particularly necessary for the website to function and is used specifically to collect user personal data via analytics, ads, other embedded contents are termed as non-necessary cookies. It is mandatory to procure user consent prior to running these cookies on your website.
SAVE & ACCEPT
Skip to content